The Elimination Diet is a process of eliminating common trigger foods to discover if you are intolerant to specific foods or if certain foods cause unwanted symptoms. The elimination diet can be used for a whole vary of symptoms for example, excess gas, bloating, or GI disturbances, eczema, psoriasis, or acne, lethargy, or allergy type symptoms such as itching or inflammation etc.

I journaled my process and experience doing the elimination diet and will use my journey as an example. My reason was to find if I had a trigger food causing my clinically diagnosed eczema. So yes I did seek medical attention and have been diagnosed with eczema. I had tried all the prescription creams suggested, and tips my doctor had gave me and NOTHING worked. Hense my reason for resorting to the elimination diet.

The Process of eliminating:

Create a list of all suspicious foods. If you are unsure of what could possibly causing a symptom for you here is a list of common trigger foods:

So all these foods will have to be eliminated from your diet for up to two weeks… Sounds crazy I know especially if doing a full blown elimination phase but it is possible to do it without starving I promise. They key is in the planning!

First piece of planning would be to make a list of all the foods you CAN eat. You may have to do some research on what has gluten in it or what has dairy etc. These two are especially tricky because they’re hidden in a lot of foods you wouldn’t think. Here is an example of my list:

Next step is to meal plan. Think of things you can make to have on hand and ready because the hardest part will be when your hungry and feel like you have nothing to cook or have to eat. Figure out what kind of quick snacks you can have. Also figure out your protein sources as adequate protein will be important for feeling satiated and aiding in bodily processes.

Next plan out your time frame. Some research will say you have to do it for a month some will say one week, but in my opinion this will be different for everyone and it’ll depend on your specific symptoms and how severe they are, AND how long it takes for them to subside. I planned for two weeks on the diet with reintroduction of one food item at a time after that.

Next will be to create a journal or get a little notebook and write down what your baseline symptoms are so you can monitor if they are getting better or worse with eliminating foods. Another option would be to take pictures if problem is external. From my log I noted symptoms starting to get better after just three days.

That being said symptoms kind of fluctuated after that. They would seem to get better then I would have a flare up, then they would get better again. This lasted for just up to the two week marker but in my log noted there were food items I consumed that were “cheat” items I was unaware had elimination things in them. Example had some vodka and didn’t realize it had gluten in it lol Hand did flare up but subsided two days later.

By the two weeks it appeared my symptoms were pretty well gone just some scarring from where my eczema patches were. Therefore I decided to start reintroducing. My plan was to reintroduce one thing at a time and give each food item two days to react. I wanted to start with my biggest suspicions first. What I found is I had almost an instant reaction right away when consuming a “trigger food”. I gave it a day to see how severe the reaction would be and then if severe enough I would eliminate it again.

I then moved on to the next item. The second item I had no reactions therefore kept consuming it and monitored. If I made it a full day with no reactions to the item I considered it okay to eat.

It was the third big item that I really screwed up on because I lost compliance. I started cheating and consuming little small amounts of the first item which I KNEW caused triggers. This is where will power has to be SO strong. Even me who can turn down anything just couldn’t obtain from certain cravings. Maybe because I felt too restricted?

Anyways I did come back from the cheats and kept going with reintroducing foods. In the end all my symptoms did go away, my skin cleared up and I stayed away from my trigger foods for a good month and a bit. Eventually I reintroduced my trigger foods back and my symptoms remained gone. Not sure if it was the change of weather or if something switched systemically in my body.

I know this won’t be the case with everyone and that it is possible you may have to stay away from trigger foods for life. It will depend how much your symptoms effect your life or bother you. You must decide how much quality of life you have with either eating these foods and having discomfort or vice versa, staying away from those foods and having other options with a higher quality of living. 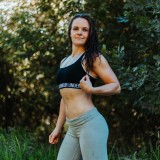